Friday Focus: an excerpt from The Crazy Old Lady Unleashed by Kathleen Valentine 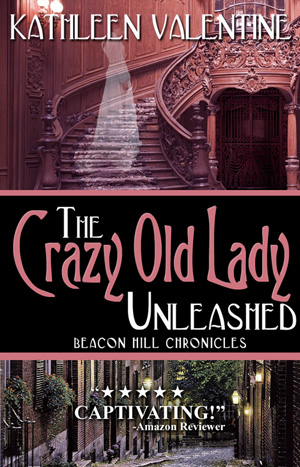 In an effort to rid the Thorndike townhouse of spirits, Vivienne Lang, accompanied by Joe and Tom Quinn, go in search of an exorcist they’ve heard about.

“I think we’re almost there,” Tom said. “Brother Gregory said it was just past the old fort.” He pointed. “There. I think that’s it.”

At the top of a hill overlooking Boston Harbor, a weather-beaten salt-box style house next to a long greenhouse sat surrounded by vast, tidy gardens.

“It’s beautiful,” Viv said as she got out of the car and stretched. “What a view!”

“No kidding, huh?” Joe got out, shaded his eyes with his hands, and pointed. “That’s Boston Lighthouse right in front of us but see that light farther out?”

“Yes.” Viv followed suit, shading her eyes. “Where is that?”

“That’s called The Graves Light. It’s nine miles out from Boston.” He turned and pointed in the opposite direction. “See that?” He pointed toward a flicker in the loom above the water.

“Yeah. That’s Minot’s Ledge. I bet on a really clear day you can see all the way to Provincetown.”

“I’m going to go knock.” Tom and Joe turned back to the house but Viv, enthralled by the view, wandered down the driveway, both hands shading her eyes.

“You must be the brothers Quinn.” The screen door opened and a stocky man in baggy jeans and a dirt-stained sweatshirt crossed the porch. Except for the tonsure on his head he looked like any other middle-aged man. He held out his hand. “I’m Brother Gregory Aston. Welcome.”

“Hi, I’m Tom Quinn. And this is my brother Joe.” Tom glanced backward. “What happened to Viv?”

“She’s still wrapped up in the view. What a place you have here,” Joe said to Brother Gregory.

“Joe’s fiancee,” Tom said. “She’s the one who needs to talk to Brother Maksim.”

“Oh dear.” Brother Gregory frowned. “Bringing her here without warning might not have been a good idea. Brother Maksim is a difficult person under the best of circumstances but he’s got a lot of problems with women.”

“Oh shit, is that him?” Joe turned and, as they watched, an enormous man rose up from one of the gardens.

“Yes.” Brother Gregory cupped his hands around his mouth and hollered, “Brother Maksim!”

The giant strode toward Viv.

“Crap. Viv’s not a good person for men with issues about women to be around.” Joe broke into a run.

Brother Maksim either did not hear his name being called or chose to ignore it. He reached out as he neared Viv and grabbed her arm. In a flash, she turned, slammed her heel into the back of his knee and brought her elbow down in the middle of his back, sending him sprawling, face down in the grass.

“What the hell..?” Tom stopped dead in his tracks as Joe grabbed Viv and pulled her into his arms.
Brother Gregory glanced at her, a look of total bafflement on his face. He dropped to his knees next to the fallen man.
“Brother Maksim? Are you all right?”

The huge body began to shudder and shake.

“Brother Maksim?” Brother Gregory put his hands on the massive shoulders and tugged. Brother Maksim rolled effortlessly onto his back and lay in the grass laughing hysterically.

“And you taught him a lesson about scaring women,” Joe said.
Brother Maksim pushed himself to his feet, still laughing. “I like her,” he boomed.

“I’m so sorry.” Viv disentangled herself from Joe’s arms and turned to face Brother Maksim. “You shouldn’t have grabbed me like that.”

Brother Maksim put his hands on his hips and grinned down at her. He stood at least half a foot taller than Joe—who was taller than everyone else in their group—and was half-again as wide. His wild, thick hair, except for where it was tonsured, was a mix of black and gray, and he wore an equally gray beard. The left side of his face was a mass of long-healed scars but, judging by the right side, he must have been a handsome man at one time.

“Come.” He gestured toward the house. “We’ll have tea. I want to get to know this woman.”

Stay in the know and get a free e-book

Tune into the BSR Podcast